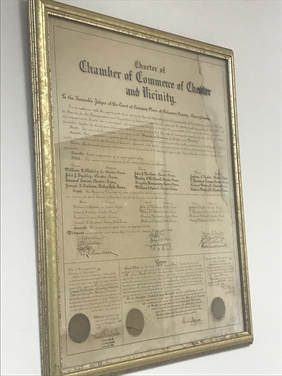 “The Board of Trade is an organized body through which the citizens may operate to further the progress, business interests and welfare of the city and its people.”

Being over 130 years old, the Chamber has had many titles and at a times, was a few separate operating organizations that have merged and is now known as the Delaware County Chamber of Commerce.

In 1980, the Chamber moved from Chester to Media run by long-time President, Jack Holefelder. Throughout history, the Chamber board, staff and members have dedicated their time to ensuring the success of Delaware County. Since its inception, Delaware County has seen millions of dollars’ worth of development and thousands of jobs have been created due to the work of the Chamber.

Currently the Chamber has over 1,200 members and is under the leadership of a long time chamber executive, President Trish McFarland.

“You owe it to yourself, the city, the nation and humanity to contribute some of your time and means to further the good that may be done all around you . . . the Board of Trade wishes you all the success obtainable and aims to help you get it.”

Sources: Some facts were cited from "The Board of Trade of Chester Presents Some Facts", © 1907.